SSD vs HDD - Should You Buy a Solid State Drive or Hard Disk Drive?

SSD vs HDD - Which is better for your needs and budget? Let's pit solid state drives vs hard disk drives right now and find out the answer once and for all.

In the past, buying or upgrading a hard drive was a straightforward affair - You simply grabbed a hard disk drive that met your storage needs and appealed to your wallet.

Fast forward to today, and things are getting more complicated for the average hard drive shopper. With solid state drive prices falling by the day and everyone touting how amazing it is, people are now asking themselves, "Should I be getting a solid state drive instead?"

Before we go any further, let's meet our contestants first: In the left the corner we have the new, snazzy solid state drive SSD that everyone is raving about, and in the right corner we have the traditional hard disk drive HDD that we all know and love: 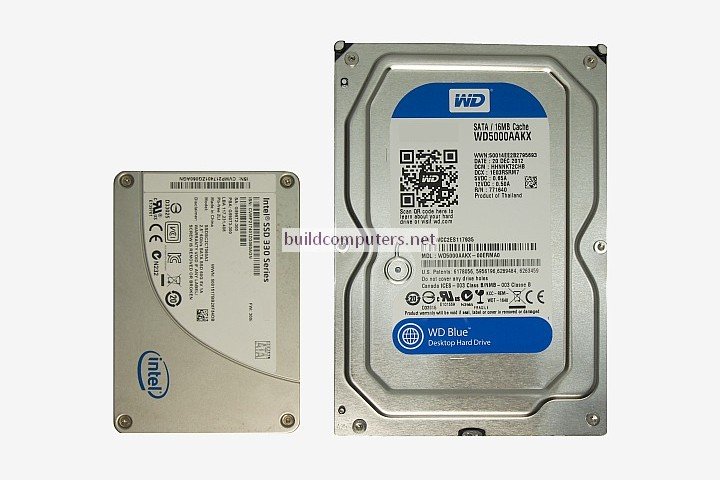 However, it's not the end of the story yet - Random read and write speeds matter too.

IOPS (Input/Output Operations Per Second) measures the random read and write speeds of hard drives - A hard drive with higher IOPS numbers is more responsive and able to multi-task better. For example, you can run a virus scan, download files, play a movie and open 20 web browser windows at the same time without hiccups.

There is no competition here - The poor hard disk drive is thrashed by an embarrassing margin. If you are a heavy multitasker or grapple with plenty of background programs (e.g. antivirus, firewall, torrents, instant messengers), then that's one solid reason to consider solid state drives.

Having a blazing fast hard drive is good and all, but we have to keep in mind that the main purpose of a hard drive is to store data... so having enough storage capacity is crucial as well.

As you can expect, hard disk drives don't just offer larger storage capacities, but at a lower price point too (we shall discuss their price differences in detail later).

While the above figures are bound to increase in the future, the fact remains that hard disk drives will always have the edge when it comes to the amount of storage space offered.

While hard drives aren't the biggest power hogs in your computer (that honor belongs to the CPU and graphics card), no one can complain about saving extra power.

For this HDD vs SSD matchup, solid state drives emerge as the clear winners.

1. By upgrading to solid state drives, laptop users will get to reap many tangible benefits - Longer battery life, big performance gains and improved durability (SSDs are able to withstand drops and knocks better as they don't have moving parts).

2. For desktop users, there are also tangible power savings to be had if you make the switch to a SSD. While some people feel that a power savings of 4+ Watts is somewhat insignificant, others will argue that every Watt counts in a world of rising electricity costs.

Now let's talk money - Just like how everyone knows that solid state drives have a speed advantage, it's also common knowledge that they burn a bigger hole in your wallet. So how much more does a SSD cost?

Let's compare the average price of hard drives per gigabyte at the time of writing:

Even with SSD prices free-falling in recent years, solid state drives will still cost you a whopping 20 times more when compared to a hard disk drives of similar capacities.

The prices of both SSD and HDD will continue dipping in the future, with SSD prices falling faster and harder. Even so, solid state drives are still going to cost heaps more than hard disk drives in the foreseeable future.

Struggling with a tight budget? Then the safe choice is sticking to a HDD that offers you enough storage. Yes, it's not going to break any speed records but at least you are getting an all-purpose hard drive that is going to meet your basic needs.

However if you fit into either one of the profiles below, then we recommend that you buy a small, entry-level SSD instead:

1. You have low storage needs - e.g. You only use your computer for basic tasks such as web browsing, email, office programs etc. You don't play demanding modern games or have large volumes of videos, images or music to store.

2. You're an advanced computer user who knows how to minimize the amount of hard drive space needed, such as installing a light operating system (e.g. Linux), cleaning caches, removing bloatware and making use of cloud storage.

If you have more cash to spare, then we will highly recommend that you go for both - A small SSD for installing your operating system (e.g. Windows, Apple OS) and programs, and an additional HDD for storing everything else (downloads, documents, videos, images, music)

Here's the logic behind this popular method: operating systems and programs are the ones that will reap the most benefits from a SSD. They are more stable, load faster and multi-task better when running on a SSD vs HDD.

On the other hand, some computer tasks just don't profit from the speed boost from a SSD. For example, you will be hard-pressed to find a difference playing a song or movie that's stored on a SSD vs HDD.

If you happen to be an active gamer, then makes sense to invest in a larger, mid-sized SSD so that you have ample space to install your favorite games on it. Larger SSDs also tend to be faster than smaller ones in general so that's another nice bonus there.